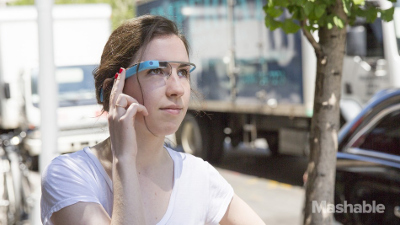 Google Glass has had a short but troubled existence, the story of which provides an interesting insight into the boundaries of socially acceptable, with regards to mobile app development and wearable tech.

Wearable technology is seen as the next frontier of consumer electronics. As the mobile phone market approaches maturity (i.e. pretty much everyone who wants a phone already has one), tech companies are keen to find new gadgets they can sell to us.

Google Glass was an experiment by Google Corporation to give us a continuous headsup display. In principle such a display would be spectacularly useful – instead of continuously looking down at your mobile phone map while walking to a new destination, bumping into other pedestrians every time you take your attention off what is in front of you, the Google Glass headsup display would allow you to see navigation directions superimposed on your normal field of view.

Google thought that by making the Google Glass product really obvious, that people would know when they were potentially being recorded, which should alleviate public concerns about being covertly recorded. Unfortunately this tactic backfired. People who fell in love with their Google Glass accessory didn’t want to take it off – which created huge concerns about privacy whenever Google Glass users (who quickly became known as “Glassholes”) wore their Glass accessory into nightclubs and other places where people didn’t want to be recorded.

The Google Glass Code of Conduct

Google tried to address public concerns about privacy, by publishing a code of conduct about how to use Google Glass.

According to The code of conduct

Glass-out. Glass was built for short bursts of information and interactions that allow you to quickly get back to doing the other things you love. If you find yourself staring off into the prism for long periods of time you’re probably looking pretty weird to the people around you. So don’t read War and Peace on Glass. Things like that are better done on bigger screens.

Rock Glass while doing high-impact sports. Glass is a piece of technology, so use common sense. Water skiing, bull riding or cage fighting with Glass are probably not good ideas.

Wear it and expect to be ignored. Let’s face it, you’re gonna get some questions. Be patient and explain that Glass has a lot of the same features as a mobile phone (camera, maps, email, etc.). Also, develop your own etiquette. If you’re worried about someone interrupting that romantic dinner at a nice restaurant with a question about Glass, just take it off and put it around the back of your neck or in your bag.

Be creepy or rude (aka, a “Glasshole”). Respect others’ privacy and if they have questions about Glass don’t get snappy. Be polite and explain what Glass does and remember, a quick demo can go a long way. In places where cell phone cameras aren’t allowed, the same rules will apply to Glass. If you’re asked to turn your phone off, turn Glass off as well. Breaking the rules or being rude will not get businesses excited about Glass and will ruin it for other Explorers.

Unfortunately either Google Glass users did not abide by Google’s code of conduct, or public hostility to Glass was too intense, because Google has decided to pull the product, pending a redesign.

Google does not want to give up on their Google Glass product – many of the people who got their hands on a Google Glass absolutely loved it. The problem was a lot of other people hated the thought of being covertly recorded by nerds wearing high tech specs.

What will Google do to solve the issue of public rejection? Its anyone’s guess, Google are keeping their ideas for a redesign pretty close to their chest for now, but ultimately the problem which must be solved is the issue of privacy.

While that may have been true, the decision ended up backfiring. With the camera in plain view, the first question most Glass Explorers got from observers was, “Are you recording me?” The design, far from diffusing the issue, actually exacerbated it; many people’s abstract fears about technology dissolving privacy suddenly had a real-world avatar. Occasionally, violence ensued.

If Google is redesigning Glass “from scratch,” it invites a host of questions: Will the new version look more like a pair of glasses? Will Luxottica, which signed a deal with Google last year to produce Ray-Ban and Oakley versions for Glass, play a part? Or will Fadell go back to concept, and rethink exactly what problem the wearable is supposed to solve, possibly leading to something entirely different?

Whatever the ultimate answers are, it’s encouraging that Google is considering them; 2015 could be the year Glass gets its polish back.

All of us nerds are looking forward to seeing how Google solves this problem. Will they remove the camera, or do something to make it very obvious when the camera is active? How Google solves this problem will have implications for other wearable technology – ultimately nobody wants to have the whole world intruding on their privacy, but the personal headsup display is obviously a potentially very hot product, providing Google can find a solution to privacy concerns.